We were honored to have our 22 year old CSA be featured in the Fresh issue of Edible Austin in early 2016. Here is the article in full from www.edibleaustin.com .  Maggie the Bloodhound has been busy signing autographs ever since.  She’s thinking of leaving her porch guard post for a career in modeling.

TECOLOTE FARM: STAYING WITH THE PROGRAM 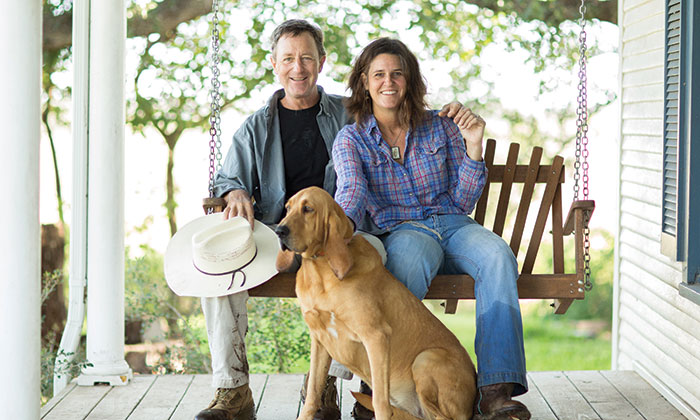 On Sundays, David Pitre reads The New York Times—from front to back—and it takes him nearly all day. It’s how he relaxes on his one day off in the “off-season” at Tecolote Farm, Pitre’s benevolent “boss.” On this pleasantly warm October day, though, Pitre takes a break from his reading ritual to sit out on the back porch with his partner in both marriage and business, Katie Kraemer. Their 1920s farmhouse is nestled in the middle of 65 acres of rich Blackland Prairie soil 13 miles east of Austin in Webberville, and the view from the porch is lush, serene and decidedly bucolic.

This “easy like Sunday morning” vibe is not the norm, however, for the lion’s share of the year. From mid-March through early August, Pitre and Kraemer operate as a blur—coordinating and operating a CSA program (the longest-running in Texas), delivering baskets to more than 300 CSA subscribers, selling at farmers markets and supplying restaurants and delivery services such as Farmhouse Delivery. In the months in between, there’s still plenty of harvesting and selling to do, as well as all of the things needed to prepare for the busy season (planting cover crops, redesigning irrigation, making repairs, etc.). But the pace is not quite as breakneck until about January, and that’s by design. “We don’t do the CSA in the fall typically, so that we don’t burn out and we can keep going,” says Kraemer.

The CSA program is the admitted bread-and-butter for the duo, and they put their hearts and souls into it. And though there are a few different types of CSA models currently in practice in and around Austin, they’ve held steadfast to the original—which also happens to be one of the more challenging to execute. The couple grows 100 percent of the produce that goes into each of their CSA program baskets, and all of that bounty has been harvested within 24 hours of delivery. Not every CSA program offers these two aspects, but Pitre and Kraemer consider them to be absolutely integral and paramount to their mission. “The center of it all is growing stuff, picking it early in the morning at its very best and delivering it the next day,” says Pitre. “Once you start cutting corners here, then you start cutting corners there, and eventually, you’re off in a different direction.” “If you make an absolute standard,” Kraemer adds, “it keeps you on track. If we compromise our standards, we don’t know what we’re doing anymore.” The other facet of their CSA model that will never be compromised is the concentrated focus on the relationship between the farmer and the people who eat what they grow. “We still think of ourselves as selling to people we know,” says Pitre. “It’s an agreement, a verbal contract, an…I know this person. To me that’s the heart of what we’re doing.”

Each week, Tecolote’s CSA baskets contain around eight to 12 different seasonal vegetables, and sometimes fruit, such as strawberries, blackberries, melons and watermelon, all of which thrive in the sandy soils of another parcel of Tecolote land on the Colorado River. To attain this dedication to variety, Pitre and Kraemer grow a staggering 150 different types of fruits and vegetables each year. Pitre pulls out his old-school composition books that methodically detail his efforts to diversify and experiment with different varieties. (“Every year I vow to make a spreadsheet,” he says with a laugh.) Looking at the books, it’s easy to see that this endeavor is fueled by both science and art: The scribbled notes speak of the growth trends, the challenges and even the beauty witnessed afield. Pitre admits that maybe a fifth of all the varieties detailed in his logs aren’t going to make it, and another sixth are going to be “a total disaster.” But there’s enough overlap, and over time and experience, he’s realized that it’s good when some things don’t make it. “It’s about putting your eggs in a lot of different baskets,” he says.

These values and business practices have roots in Pitre and Kraemer’s long relationship and their experience farming together. The couple bought their land in 1993 and named it “Tecolote”—a Spanish word for “owl”—in honor of the two great-horned owls that lived on the property. In 1994, Tecolote received its certification, and that’s when Pitre and Kraemer started the CSA program, which surprisingly, wasn’t their original intent. Pitre has always loved to cook, and when he lived and farmed in California, he sold what he grew to restaurants. He planned to do the same here, but the farm-to-plate restaurant movement hadn’t yet blossomed in Texas. Instead, the couple found the CSA model to be a better way to sell more of the good stuff they were producing.

“Even though he hates the word ‘foodie,’ David is a foodie!” Kraemer says. “He loves to cook; he loves to eat.” Turning to her husband, she playfully adds, “So…let’s not say you’re a foodie; let’s just say you’re food-motivated. And not only that, you’re taste-motivated. You want your day to be full of things that taste good, and you’ll go to the trouble to do it.” For Tecolote’s CSA subscribers, a food- and taste-motivated farmer is the best kind to know and the best kind to grow the food they eat every day.

What is a CSA program?
Founded in the U.S. in 1986, a Community Supported Agriculture (CSA) program is a partnership, most often sealed with a contract, between consumers and local farmers. In exchange for pledging financial support to the farm, CSA subscribers receive a share of the farm’s harvest, usually in the form of a basket or box of produce, which is either delivered to their homes or available for pickup at neighborhood hubs. Members benefit from the freshness and variety of the goods they receive and farmers benefit from the financial support—especially at the beginning of a season, when costs are high and income is low.